A friend's little boy is turning 3.
She wanted a cool cake for him and asked me to come up with something to do with construction.
After spending way too much time on Pinterest.
(Thank heavens for Pinterest!!)
I found a cute idea. 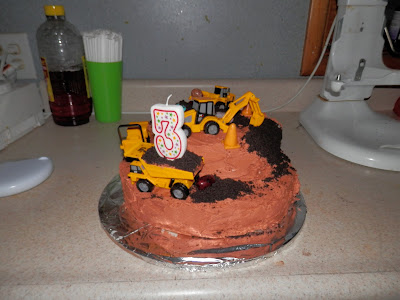 What could be better than trucks and dirt? 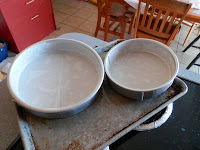 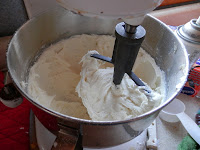 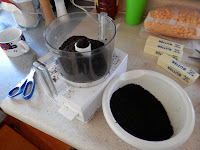 For the crumb layer I made up a quick buttercream. Since I was going to be cutting a chunk out of the cake to look like it had been excavated I knew it was going to be a crumbly mess. I frosted the whole thing and put it in the freezer for about 15 minutes before I cut the chunk out. I then put the buttercream on the cut part. That way it was still soft and the Oreo dirt stuck to it.﻿ 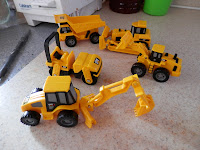 This is my favorite part. Since I couldn't find just one big digger truck I found a fun 5 pack. I wanted to cram them all on there because they were all cool trucks but alas... it wasn't big enough.
﻿ 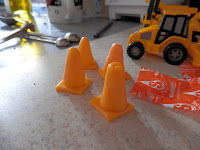 In the picture I found on Pinterest she used fondant. I have a love hate relationship with fondant. (I would like to love it but right now I hate it.) So I used Starburst. I just warmed them, still wrapped, in my hand and then molded them into cones. The bottoms I got soft in the microwave for 10 seconds and rolled out with a rolling pin. Pizza cuttered them and they stuck together pretty well with me just warming the bottom of the cone with my finger and pressing them together.﻿ 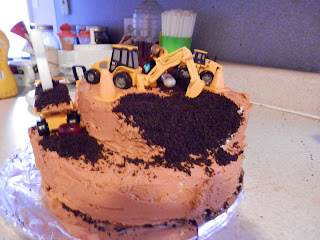 Once all the dirt was added, the trucks  placed and the cone put up it looks pretty good. I also added candy rocks into the big pile of dirt on the top.


Giant
hole!
Vinny I hope you have a wonderful birthday and enjoy your cake!!
﻿
Posted by Vicky@One Orange Giraffe at 10:40 AM

Vicky@One Orange Giraffe
I am the mother of 4 great kids, 3 boys and 1 girl. I have been married to my honey for 18 years. I love to cook and craft. This blog is to share my ideas with others.